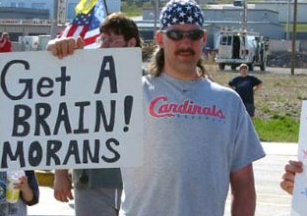 Today, I visited the blog of William Briggs, author of the new "Uncertainty: The Soul of Modeling, Probability, & Statistics," and climate change skeptic with the perspective of a statistician/antiphilosopher.  Interesting fellow, and if you enjoy heady Thomist theology, or just want to debate climate change, or a priore "evidence," his is the blog for that.

Today, he took on the sound of the "music" we hear around us in the public sphere these days, which he amusingly described:

Keep that sound going in your head and add to it to the output of a soft jazz synthesizer programmed by a community college Computers-For-Dummies student after a long night bingeing on cold General Tso’s chicken and warm beer.

Have it? Let it ooze through your mind a little. Now infect the whole shebang with the ebola virus, let it bleed and fester a while, then kick it down a hill and into traffic on a busy Los Angeles freeway.

He's not addressing the substance of the music, per se, but as he points out...

The music was full of echos, and occasional voices were heard in the distance, but they weren’t plain voices. They were filtered, warbling, ever fading, with indistinguishable words;

If you can't ascertain the substance, the point is moot.  It's already substanceless.  But, as Briggs often does, he got me thinking.  I know that the sound of popular music these days has it's detractors, with a spectrum of critiques.  There is much to be said on the subject of the sound, but any sound can be music, and be pleasing to the ear, if pared with a moving message or imagery that fits that sound.  So, what about the substance of today's music?  Iron Maiden's "Run to the Hills" may be really a loud heavy metal song, but the lyrics and message are clear, and the aggressive sound pares well with the subject matter.  Grand Master Flash's "The Message" may sound primitive and clunky, but the message is very clear and important, and again, the sound pares well with it.   Both songs were recorded in 1982, 35 years ago.


Here's the current Billboard Top 100.  If you can stand it, try listening for a minute to any of the songs.  Take the current top single, Ed Sheeran's "Shape of You."  It's cute.  The kind of thing you'd expect a love-lorn teenager to appreciate and forget about in week.  But here's the thing... keep going through the list, just randomly pick songs and plug them into YouTube and listen.  Notice something?  It's ALL like something only a love-lorn teenager would enjoy and forget about in a week.  You would be hard-pressed to find one or two songs on that ENTIRE list of 100 SONGS that offer anything of any deeper artistic value whatsoever.

Go through the Country, Rock, even the Christian charts.  Notice something?  It's most ALL just silly nonsense for kids.  Barely a worthwhile listen in ALL those HUNDREDS of songs.  Now, go to the Billboard Charts Archive.  Take a little trip back in time and look at the top singles throughout the years.  Notice something?  The artistic value of the songs compared to today?  Sure, there are plenty of silly teenager ditties, as usual, but in 1968 we had "Mrs. Robinson" and "Hey Jude."  In 1974 we have "Cat's in the Cradle" and "Time in a Bottle."  By the mid-1980's?  It looks just like today.  You would be very hard-pressed to find songs of the intellectual, spiritual, cultural value of "The Boxer" or "American Pie" from the mid-80's on.  If music taste is a cultural indicator you like, we haven't matured a day over the course of two generations.

Take television or the movies.  Sure, there are some quality programs and movies out there.  But think about this - when's the last time you saw a movie that moved you like "Ordinary People," or bared the tragic-comedy of the powers that be in "Dr. Strangelove," or made serious critique of laizzez faire capitalism like "The Grapes of Wrath?"  Can you compare any television show on today with "All in the Family" or "M.A.S.H.?"  And again, sure, there was plenty of crap back then too, but yet somehow, with far fewer choices and venues, there was so much more culturally valuable movies and television then.

There's nothing particularly new about marketing crap.  In the pop culture biz the target audience has long been young people.  They consume more pop culture than older people, and they buy more stuff that is advertised with it.  It's a business, after all.  But today we have "niche-marketing," programming targeted for most every demographic you can describe, yet we still can't find an "All in the Family" or a "M.A.S.H." in any of it.  It's as if the demographic, "intelligent," is assumed to no longer exist.  But again, we're talking about a business - and intelligent, cultured consumers don't buy crap.  It's not that they don't exist.  It's just that they aren't consuming the popular culture products.

One of the few bastions of quality programming of the arts, news and educational programming is public broadcasting, the Corporation for Public Broadcasting, which brings us PBS, NPR, PRI, etc.  The highest quality news show on television?  The NewsHour on PBS.  The best science-news show?  "Science Friday" on NPR.  The best science show?  NOVA.  The best in-depth news studies?  Frontline.  The best music and arts show?  Masterpiece Theater.  The best young-children's educational programming?  Sesame Street.  Teaching children to read?  Reading Rainbow.  New and controversial subject matter in a thoughtful and digestible form?  Independent Lens.  Nature?  NATURE.  The best children's educational programming, higher arts and culture, documentaries, foreign culture, science, stage, you name it, it comes from the Corporation for Public Broadcasting ("and the support of viewers like you").  Because the audience for PBS and NPR and such are by definition not teenagerish silly pop consumers, it requires a public investment to make them so.  And it costs $1.35 a year of your per capita federal taxes.  Without it?  We'd be an even dumber society.  There would be even less substance.

Critics of the CPB make arguments ranging from my good pal FreeThinke's position that we should be wary of government-funded arts and news, to those who flatly assert, "Well, if there's a market for it, it will come."  To wit I say, "If there was a market for quality private schools for poor children, we'd have it already."  (The irony of demanding tax payer money for private schools is lost on the "School Choice" movement.)  Just because something isn't a viable private market endeavor, does not mean that it has no value.  And just because something sells, that doesn't mean it is substantive, meaningful, educational, or spiritual, that it is valuable beyond a week for a love-lorn teenager.  President Donald Trump, though, is apparently one the latter type of CPB's critics.  "Sur-prise, sur-prise, sur-prise!"

So now, the President wants to eliminate funding for the CPB.  How's that for irony?  We can't force people to watch PBS or listen to NPR, but at least it's out there.  At least, when you're flipping the dial, you can come across something that can teach you, elevate you, broaden your horizons, something that has real substance and life-long value.  It may not be reaching the audience it once did, what with all this niche-marketing and the internet, but I would suggest the CPB get more funding, advertise it's presence a lot more, get the word out that it is out there, and explain that it is something we desperately need as a culture.  We are not going to have new, quality, substantive arts if the people are not exposed to anything but the same substance of the past or no substance at all.  And we're going to dumb down our society even more without it.  Think about this - Donald Trump is now the President of the United States.  What about that suggests to you we do not desperately, more than ever, need the Corporation for Public Broadcasting?

DOUCHEBAGS IN THE NEWS!!!

Attack of the Blogs!!!